Distractions Pull Drivers’ Attention from Road, Even When Hands-Free 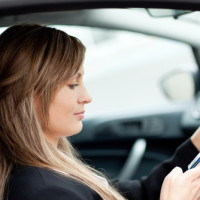 Even though most of us can remember a time when using our phones was an unthinkable impossibility while we were behind the wheel of a car, now it seems almost as unthinkable to be out of touch from the rest of the world for even a moment. Knowing the enormous risks inherent in using phones while driving, most responsible drivers have adopted hands-free technologies to remain reachable while on the go. Recent research shows, however, that drivers still must exercise caution when using electronic devices while driving, even when using hands-free voice commands.

A study conducted by a team of researchers at the University of Utah, along with support from the AAA Foundation for Traffic Safety, examined ten of the most popular cars’ 2015 model in-vehicle entertainment systems, as well as three popular smartphone voice recognition systems, and scored the systems based on the level of distraction they provided to users. Systems could receive a score ranging from 1 to 5, with a 1 being akin to driving while completely focused on the road, 1.2 similar to driving while listening to the radio, and a 5 like driving while solving a math problem and memorizing a list of  words. The study found that the Mazda 6’s in-vehicle entertainment system was the most distracting, scoring a 4.6 on the scale, and the Chevy Equinox was the least distracting, at 2.6. Among the voice recognition software systems, Microsoft’s Cortana scored the highest at a 3.8, and Google Now the lowest at a 3.

Across all thirteen systems, the researchers found that a driver required an average of 27 seconds after issuing a voice command to fully return their focus to the road. This would allow a car traveling at 25 mph to drive over 350 yards without being fully engaged in what was happening on the road in front of them, and scan ahead for braking vehicles, hazards, or pedestrians. Needless to say, that is plenty of time for a serious auto accident to result.

If you have been hurt in a crash in Idaho caused by distracted driving, contact the experienced and knowledgeable Twin Falls personal injury and car accident lawyers at Pedersen Whitehead & Hanby for a consultation on your case, at 208-734-2552.